The homelessness issue in the West is quite complicated. Homeless camps have been tolerated in western liberal cities in a way that people from the rest of the country would find rather jarring if you haven’t seen it. Unlike, say, Boston or Philadelphia or Atlanta, the homeless are just everywhere in Portland and Eugene and the Bay Area. And they have a political constituency too that goes back a long time. I remember back in college in the mid 90s when the Eugene City Council passed an ordinance against panhandling in front of businesses and the political response was one of such outrage by the city’s liberals that they repealed it, much to the disgust of business owners.

So there’s a culture of accepting homelessness in the West and that culture attracts those who are living a nomadic life intentionally. But the extreme rise in the price of housing and calamities such as climate change-exacerbated wildfires have made this all the worse. The economic dislocations of the pandemic only added to the problem. Now, the West is effectively becoming like cities in the Global South, where you massive wealth right next to extreme poverty. It’s not good. It’s a complete failure of public policy, one that is deeply connected to the idea that the price of housing is an inalienable right that all Americans who can afford it should receive without interference from the government.

Obviously, this is not a sustainable situation. Santa Rosa is trying to figure it out and this is a pretty good long read on the situation. A quick excerpt:

In creating the Finley Park model, Santa Rosa leaders drew on a few basic tenets. Neighbors were worried about crime and drug use, so the city deployed police officers and security guards for 24/7 patrols. Neighbors worried about trash and disease; the city brought in hand-washing stations, showers and toilets. Catholic Charities enrolled dozens of camp residents in neighborhood beautification projects, giving them gift cards to stores like Target and Starbucks in exchange for picking up trash — usually $50 for a couple of hours of work.

A few times a week, a mobile clinic serviced the camp, dispensing basic health care and medications. Residents had access to virtual mental health treatment and were screened regularly for COVID symptoms; only one person tested positive for the coronavirus during the 256 days the site was in operation.

“We were serious about providing access to care,” said Jennifer Ammons, a nurse practitioner who led the mobile clinic. “You can get them inhalers, take care of their cellulitis with antibiotics, get rid of their pneumonia or skin infections.”

Rosa Newman was among those who turned their lives around. Newman, 56, said she had sunk into homelessness and addiction after leaving an abusive partner years before. She moved into her designated tent in September and in a matter of days was enrolled in California’s version of Medicaid, connected to a doctor and receiving treatment for a painful bladder infection. After two months in the camp, she was able to get into subsidized housing and landed a job at a Catholic Charities homeless drop-in center.

“Before, I was so sick I didn’t have any hope. I didn’t have to show up for anything,” she said. “But now I have a real job, and it’s just the beginning.”

James Carver, 50, who for years slept in the doorway of a downtown Santa Rosa business with his wife, said he felt happy just to have a tent over his head. Channeling his energy into cleanup projects and odd jobs around camp, Carver said, his morale began to improve.

“It’s such a comfort; I’m looking for work again,” Carver, an unemployed construction worker, said in November while cleaning stacks of storage totes handed out to camp residents. “I don’t have to sleep with one eye open.”

“This taught us valuable lessons on how to keep the unsheltered population safe, but also we were able to get people signed up for health care and ready for housing faster because we knew where they were,” Holmes said. Of the 208 people served at the site, she said, 12 were moved into permanent housing and nearly five dozen placed in shelters while they await openings.

wyeager
reply
I'm a homeowner in this community and I fully support the Finley Park model, there and everwhere.
Blur Area

All this was a long time ago, I remember,
And I would do it again, but set down
This set down
This: were we led all that way for
Birth or Death? There was a birth, certainly,
We had evidence and no doubt. I had seen birth and death,
But had thought they were different; this Birth was
Hard and bitter agony for us, like Death, our death.
We returned to our places, these Kingdoms,
But no longer at ease here, in the old dispensation,
With an alien people clutching their gods.
I should be glad of another death.

Obviously the Republicans at this moment don’t have the votes to block the latter, but this is now the guiding long-term principle of both their leadership and their base (Don’t fall for the claim that Mitch McConnell in particular was powerless here: The Senate majority leader has enormous formal and informal power to sanction deviationist members, by for example stripping committee assignments, blocking pet legislation, calling big soft money donors etc.)

Political systems in particular and societies in general both depend on the maintenance of informal norms as much or more than they do on adherence to formal rules. The most basic norm is that these systems/societies assume that sociopaths are and will remain extreme outliers, and that therefore they can be constructed on the basis of that assumption.

For example, contract law in the United States legal system simply wouldn’t work if most or even a large minority of contracting parties were sociopaths, because in game theoretical terms the most personally advantageous thing for a contracting party to do in a huge number of situations is to defect. This is because in those situations the cost of enforcing contract rights will outstrip the benefit to the enforcing party of enforcing them, and the defecting party knows this.

That of course is a precise description of Donald Trump’s entire business strategy and indeed life as a whole: don’t honor your legal obligations whenever it’s to your advantage not to do so. This is how sociopaths think; and someone like Trump literally cannot even understand the argument that he shouldn’t do something that’s good for him because it’s bad for society.

Sociopathy can even be transformed into a political ideology: It’s called “libertarianism,” and its votaries labor mightily to escape the natural implications of their views, by inventing elaborate and subtle arguments about how self-interested defection from social norms will not actually be self-interested in the long run, for Reasons.

Here’s a not very elaborate or subtle argument: Anthropology teaches us that, in societies that live at or near the ecological margin, repeated defection from social norms tends to get the defector killed outright by the rest of the group. Such societies can’t afford luxuries like the delightful intricacies of the Federal Rules of Civil Procedure, because their members understand that any toleration of sociopaths in their midst will lead rapidly to the extinction of the group as a whole. Hence these societies employ their own versions of summary judgment and Rule 11 of the aforementioned FRCP.

Complex contemporary societies can afford to be more tolerant of sociopaths, because the enormous surplus wealth of such societies creates “a lot of buffers,” as Willie Cicci might have put it. But neither that wealth nor those buffers are unlimited. What, for instance, happens when one of the two parties in a two-party putative democracy becomes frankly and openly sociopathic? That is, what happens when sociopathy becomes a rampant ideology, instead of just a handy DSM-V categorization?

At that point, that society as a whole is forced to the social and political equivalent of the ecological margin. The implications, anthropologically speaking, of this situation are that the society and those who have put it in this circumstance cannot continue to co-exist, and will not.

wyeager
reply
This is why we can't have nice things.
Blur Area 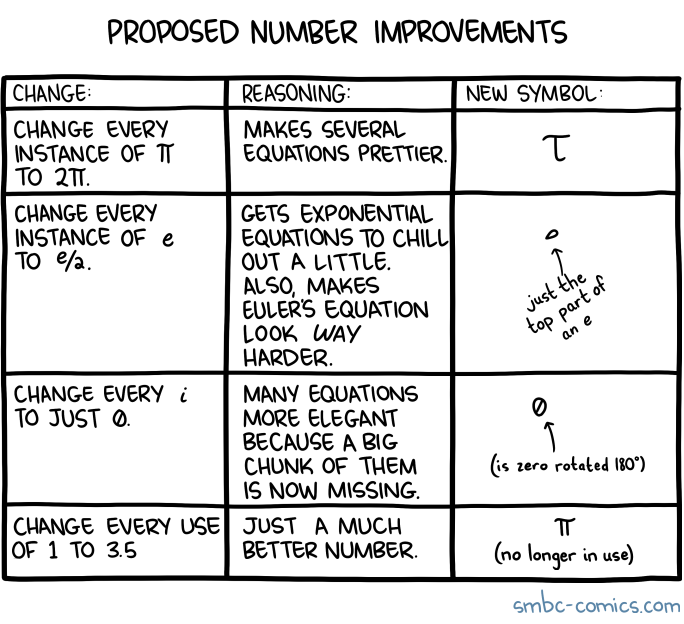 Hovertext:
Also can we please get rid of numbers over 100?

Weinersmith getting in on Munroe's game.
Blur Area

Kaligule
Holly shit, I was fooled to think I am in the other feed.

In 2005, a 21-year-old Canadian woman named Nicole stole some small artifacts from Pompeii. Since then, she apparently suffered nothing but bad luck, including two bouts with breast cancer, as well as various financial woes. As a result, she has returned the artifacts, along with a letter of apology.

“I wanted to have a piece of history that couldn’t be bought,” wrote the woman, who said she was “young and dumb” at the time.…”We can’t ever seem to get ahead in life,” she wrote, blaming the bad luck on the tiles.

It was bad to have stolen these items, and it’s good to have returned them. But my favorite part of the story is this tremendous bit of trolling from the caretakers of Pompeii:

Over the years, around a hundred visitors have returned small artifacts like mosaic tiles and pieces of plaster that they stole during a visit to Pompeii, according to a spokeswoman for the park.

The items were sent back along with letters from the visitors “claiming to have derived only bad luck” from taking away the artifacts, the spokeswoman told CNN.

A selection of letters and returned artifacts has been put on display at the Pompeii Antiquarium, she added, noting that, while the value of the artifacts was not significant, the letters were interesting from an anthropological perspective.

The idea of these folks just casually noting how cursed everything clearly is, and what a bad idea theft is, really tickles me.

Also, this is as good a post as any to promote one of my own guiding principles for life. It’s a variation on the Golden Rule, focused more on actions. Namely, before taking an action, it’s good to stop and think “What if everyone did this?”. If this thief had considered it, she’d have realized the site would rapidly cease to exist. She might have avoided a decade and a half of misfortune. If more people stopped and thought “What if everyone did this?”, the world would be a much better place.

wyeager
reply
What if everyone shared this story?
Blur Area

Recently, friend of the site Kim B. received a rather shocking notification on her phone. There’s really no two ways about it – she was being advised to Netflix and chill:

That is quite the suggestion, particularly to someone in a committed relationship.

It’s also just a very bad notification. Who the hell is sitting around, wondering what to watch, and unable to find anything on their own? Are there actually people who need their phones to direct them, unprompted, with notifications about how they should spend their leisure time?1

Even if such a prompt really is useful enough, to enough people, Netflix should at least put some quotes around the title. After they’ve done that, maybe they can spend a little time writing a blocklist for content that shouldn’t be suggested. Yikes.

When I asked Kim if I could share this, she immediately approved. However, she was sad with how I’d cropped things. As seen above, the phone’s background featuring her delightful dog Eva is not properly visible. Looking again, I realized a larger view would serve us well as a closing. Eva’s seemingly disdainful expression strikes me as a rather perfect response to this ridiculousness:

You said it, dog.